Back in March, we announced the winners for our Unleash Your Potential Program, in which six participants got to configure their own System76 computer to use for their awesome projects. This first awesome project is the Garage Garden, helmed by awesome project-er, engineer, and mighty green thumb Ben Ruel. We sat down with Ben to see how his project has been growing on the Meerkat.

Can you tell us about the Garage Garden project? What’s it all about?

I spent a career with the Coast Guard and came up here—my final tour with the Coast Guard was in Juneau. Being in southeast Alaska, we’re constrained with what they call off-the-road systems, and the only way in or out of town is by boat or by plane. So all of our food comes up here by barge for a small nominal fee, or by aircraft for an incredibly large fee.

When I came up to Juneau with my wife and kids 11 years ago, we noticed that by the time our produce gets up here, it’s lived on a barge a week, two weeks out of Seattle, and you have no shelf life left on them. We started trying to grow food within the first year of getting here, and we came to the conclusion pretty quickly that with 300 days plus of rain every year, outdoor growing wasn’t really a viable option. That’s when we started a hobby farm in a garage growing some stuff in soil under fluorescent lights, as odd as that sounds.

Since then, we’ve progressed into hydroponics, but we’ve done it very manually. We go out every other day and take readings by hand, so I’ve been doing some research about building IOT devices that will talk back and automate some of the readings. My dream would be using it to actually control the concentration of nutrient solutions that we use. The overall goal is we’re going to build the hydroponic monitoring network of IOT devices, and use the Meerkat as a control center for the devices and a repository for all the data. We’ve also been doing some investigating behind the scenes into whether or not it could grow enough legs to become a business.

Is there a specific type of produce that you’re starting with?

We’ve been all over the road. Right now we’ve got lettuce. We’ve always got some kind of green leafy vegetables whether it’s any variety of lettuce that will grow hydro, some bok choy and tatsoi, and we’re growing kale like it’s going out of style. We’ve grown cucumbers to the point where I think I’ve harvested 65 pounds of cucumbers off of 4 plants over the last couple of months, but we’re really constrained by our size.

I live in a relatively small 3-bedroom house, and we’re just using a one-and-a-half car garage as our grow area. Right now I’ve got two tents. As funny as it sounds, cannabis is legal in Alaska and has been forever—my wife and I don’t touch the stuff, but because it’s been legalized, the infrastructure and the supplies that we need are freely available. We’re growing tomatoes in a tent that’s designed for marijuana growth. It works really well. It helps to maintain efficient temperature control; you can maintain temperature and humidity, block out extraneous light if you don’t want it, and cycle the lights on and off.

Depending on whether it’s too hot in the summer we’ll run the lights at night, and in the wintertime we’re looking for extra warmth, we can shift the cycle and run the lights during the day. Our big benefit up here is that, because Juneau’s all on hydroelectric power, electricity is really cheap.

What variables are being monitored?

With hydroponics, there’s a good number of parameters that you’ve got to try and keep track of. You’re basically diluting nutrients in a solution of as pure water as you can get. You want to keep track of things—your pH can’t be too acidic or too alkaline, for example.

The other big parameter is the electrical conductivity, or total dissolved solids. You want to make sure you’ve got the right concentration of nutrients, and that your nutrient solution isn’t salting up. As you’re adjusting pH back and forth, it’ll start demineralizing salt, so tracking that data gives you a good indication for when it’s time to dump the reservoir and start over.

We’re doing it manually now. I go out every couple of days and we take samples, and sit down and log it into a spreadsheet. The Meerkat acts as a control center for programming devices, keeping a repository of the programming for the IOT devices that we’re using (Arduinos with the esp8266 chips) as well as running different database programs as Docker containers, so that they can be spun up and knocked down fast enough as we try and figure out what the best way to move forward is. We’ve got a couple of database servers that I’ve been playing around with, trying to break from traditional SQL and looking at NoSQL type of databases.

I’m not an IT guy by trade. I’m more of an electronics guy, so I’m kind of doing it as a study-by-night type of project.

What has your experience been like with the Meerkat so far?

I’m actually completely blown away by the Meerkat’s performance. It’s astounding what that small form factor and footprint is able to do. I’ve used Linux for a number of years, and basically everybody’s heard of System76. I’ve seen Pop!_OS before and never really played with it all that much, but I’ve actually grown to love it. The feel, the ergonomics, the interface, and even down to the color schemes that come bone-stock right out of the box. They just make more sense to me. I’m looking forward to the COSMIC update after researching that to see how the differences in the workflow will affect things. 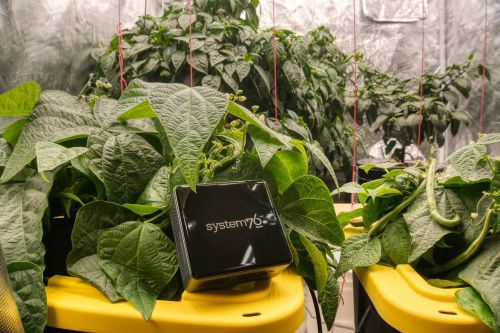 What software are you using for this project?

Right now we’re writing in Docker containers and running the Tick Stack from Influx. We’re also running Telegraf, Protograph, Capacitor, playing around with the Time Series Database, I’ve got a container running MongoDB I run with SQLite, and there’s a couple different IDEs I’ve got loaded on there as well for programming Arduinos or esp8266 chip flashing.

How was the setup process for the machine?

It was up and running within 10–15 minutes of pulling it out of the box. I actually took it to work, too. We do a lot of work with government agencies, and I’ve been doing a lot of microwave radio repair. I’ve got a pretty small workbench at our shop here in Juneau, so using the Meerkat to drive all of our test equipment to control the radio while logging data coming out of the radio, it was perfect. It had enough horsepower to remotely control the test equipment. I wasn’t pushing it all that hard, but setting it up and going back and forth between having it at home or at work, it was negligible to get it up and running.

Stay tuned for further updates from Ben Ruel’s Garage Garden and cool projects from our other UYPP winners!